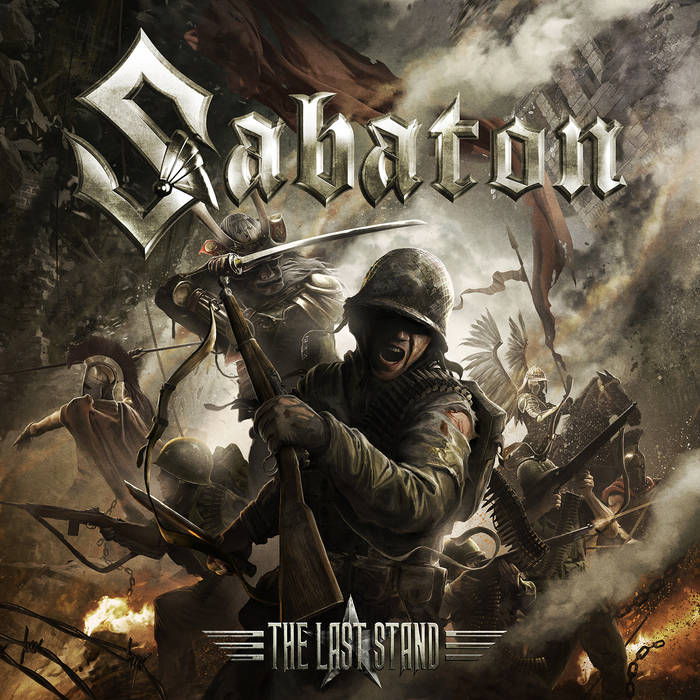 antonioferro My favourite concept album of Sabaton. It plays like an anthology, each about an epic, and typically tragic Last Stand. No one gets out alive. It's hard to name a favourite but I guess I'll go with the Lost Battalion because of how much it surprised me. Favorite track: The Lost Battalion.

Sainteater An album I keep coming back to again and again. Never grow tired of recounting these tales to anyone who will listen. Favorite track: The Last Stand.

Bennettizen The Last Stand takes the best qualities from Sabaton's prior works and breeds them with consistency, several new sounds, and a catchy theme to give birth to a world-class album. Favorite track: The Last Stand.

If you have any doubts, please update your books now: our favourite Swedish war machine SABATON are on their way to the absolute top of the heavy metal world.

Need some evidence? As we speak, these platinum selling, Falun-based heavy metal heroes are headlining some of the biggest European festivals through fires and flames and playing massive stadium concerts in front of tens of thousands of enthusiastic fans with legendary comrades, such as IRON MAIDEN and SCORPIONS. In August, SABATON will once again command the troops on the holy grounds of Rockstad Falun Festival - aka Sabaton Open Air - when the band hosts their own three day festival - closing the last day with an explosive performance. Then, later this year, SABATON's sight will be directed at the USA, where the band is a doing huge tour and also performing at Ozzfest Meets Knotfest Festival in California, alongside BLACK SABBATH, SLIPKNOT and others.

However, this is just the beginning: when the winter arrives, SABATON will unleash their prestigious live power upon the whole of Europe. No mercy will be given and all guns will be blazing, when this tireless killing machine will blow out sold-out arenas to another dimension. During this tour, named »The Last Tour«, SABATON's support comes from German metal legend ACCEPT.

What? The last tour of SABATON? No, not really, as the band's worldwide war plans are already marching years ahead.

The title of this massive, to say the least, world tour comes from SABATON’s latest masterpiece »The Last Stand«. The new record, which will be unleashed to the masses in August by the world's most powerful heavy metal label Nuclear Blast Records, is simply a perfect addition to SABATON's discography, which already contains some of the most heroic heavy metal known to man.

“We have done a majestic record and we couldn't be happier with it. Is »The Last Stand« SABATON's strongest album to date? Well, time will tell us that, but one thing is 100 % guaranteed: on the record, there are lots of songs that will go down in SABATON's own hall of fame,ˮ says the band founder and bassist Pär Sundström.

“»The Last Stand« contains all the elements that our fans could ask for,ˮ adds the band's main composer and singer Joakim Brodén. “The new record tells a victorious tale of SABATON in 2016, and even further. Lots of fresh ideas and unprecedented magic can be heard on these new tunes - for example, check out bagpipe and Hammond driven major key song 'Blood Of Bannockburn'. We have never done anything like that before.ˮ

“At the same time, our legions of diehard fans will be pleased to observe some echoes from our older works: such as relentless heavy metal of »Primo Victoria« (2005), catchy flavours of »The Art Of War« (2008) and deep epicness of »Carolux Rex« (2012). »The Last Stand« contains all of these elements - and lots more!ˮ

The lyrics have always been a very important part of SABATON's art. Thanks to their classic metal anthems, such as 'Ghost Division', 'Uprising', 'Soldier Of 3 Armies', 'No Bullets Fly' and '40:1', SABATON has achieved superstar status in countries like Sweden, Finland, Czech Republic and Germany. Poland, however, signifies “something elseˮ for these guys: SABATON's members have been adopted as Poland's honorary citizens and the band's biggest show ever happened in Przystanek Woodstock Festival in front of half a million fans.

“Regarding new lyrical themes, there were several possibilities this time, but when we came up with the idea about the famous last stands on battlefields and other historical places, that was it - we didn't have to look any further,ˮ tells Brodén.

“The previous album's heroic stories about fighting and surviving were a perfect match for SABATON, but these new tales may be even more interesting to our devoted fans. The lyrics are based on very interesting historical episodes and they will open a whole new world for the friends of our band,ˮ insists Sundström.

SABATON have reached their unshaken position as heavy metal's AAA-torchbearer after releasing ingenious studio recordings and playing endless amount of unforgettable live shows. »The Last Stand« is another unquestionable and bulletproof evidence of SABATON's top class abilities and it will be followed by the band's most gigantic world tour to date.

Sabaton is a five-piece metal band from Sweden. Combining soaring power riffs with distinctive deep vocals, their lyrics focus on the exploits of war, from ancient historical battles to modern acts of heroism. Their electrifying live show – which features a full-sized and firing tank – has won numerous industry accolades, while two of their eight studio albums are certified platinum sellers. ... more

Bandcamp Daily  your guide to the world of Bandcamp